Investors Are Getting Nervous, Even if They Aren’t Showing It
Opinion
Share

Investors Are Getting Nervous, Even if They Aren’t Showing It

Picture of the Day

It should go without saying that the market is pretty extended here, encouraged by a combination of good-but-not-great economic growth and the steady drip of cheap money stimulus. By pretty much any measure you'd care to use, sentiment, investor positioning, and valuations are extended.

Stocks haven't suffered a major correction in 33 months — twice the norm even within the confines of a cyclical bull market. The cyclically adjusted price-to-earnings ratio on the S&P 500 has only exceeded current levels in 1929, 2000 and 2007. Bond market spreads have collapsed near all-time lows. And, in a sign of complacency, stocks have stopped responding to downside earnings adjustments while bonds no longer seem to care about credit quality, ignoring the rise of corporate leverage. Even the anxiety about geopolitical risks in Ukraine and Gaza lasted only a day, as stocks rebounded Friday from their biggest one-day drop in months on Thursday.

While Federal Reserve chairman Janet Yellen may have brushed aside complaints that six years of zero percent interest rates have fueled another asset price bubble, she as well as other Fed officials have been warning of specific areas of growth and extended valuations. Dallas Federal Reserve President Richard Fisher warned that investors, in some cases, were strapping on Fed-provided "beer goggles" that made investments look better and safer than they really were.

Amid the warnings, investors backed away, at least for a bit, from some corners of the market — including the very areas the Fed cites as having valuations that are “substantially stretched.” 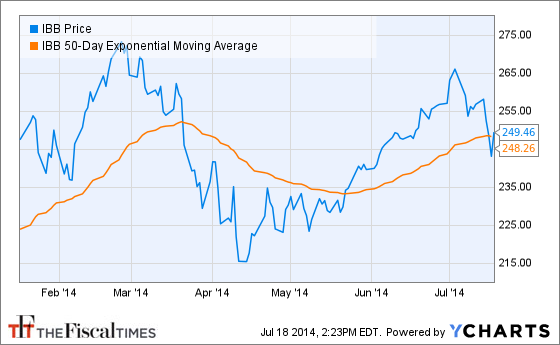 The Russell 2000 small-cap index is struggling to maintain its 200-day moving average, a level that aside from a short-lived test back in March and April, has been held since 2012. Biotechnology stocks, as represented by the iShares Biotechnology (IBB) ETF, are testing a 50-day moving average and have already dropped more than 6 percent from their high earlier this month. Stocks like Twitter (TWTR) and Pandora (P) are under pressure.

And high-yield corporate junk bonds, as represented by the iShares High Yield Corporate Bond Fund (HYG) are suffering their most dramatic pullback since the “taper tantrum” in the summer of 2013, as investors prepared for the start of the reduction of the Fed's QE3 bond-buying stimulus program. 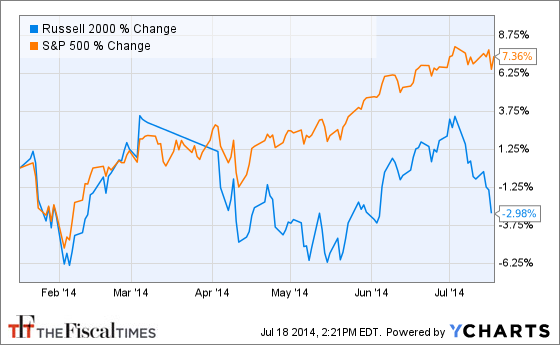 The gap between the selling in these areas and the ongoing ebullience in areas like large-cap stocks has reached extremes. The performance gap between the Russell 2000 and the S&P 500 is especially notable, as shown in the chart above.

Jason Goepfert at SentimenTrader noted earlier this week that while a differential of this level hasn't been seen before (the Russell 2000 got started in the late 1970s), similar behavior was seen in 2003, in January 2011 and in May 2011.

In 2003, the overall market powered higher for a couple more months before suffering a temporary setback. In January 2011, stocks climbed for another month before hitting a wall. And in May 2011, it marked the top of the market before stocks suffered their most violent decline of the bull market to date.

One way to interpret this is that investors are becoming more apprehensive about the market overall, but are just not really showing it yet. This explains the narrowing of buying interest I'm seeing in measures of market breadth: The percentage of NYSE stocks above their 50-day moving average dropped below 55 percent on Thursday, down from a peak of more than 83 percent earlier this month.

Related: 7 Financial Stocks That Might Help You Make Bank

At this point, the optimists are content to dismiss the selling pressure hitting these areas as an orderly response to warnings by the Federal Reserve. But I worry they are reflective of deeper troubles and are merely previewing broad market troubles to come.

It's worth remembering that former Fed chairmen Ben Bernanke and Alan Greenspan both tried to dismiss housing bubble warnings back in 2005 and were ultimately proven wrong. Bernanke tried to justify the price rises as reflective of "strong economic fundamentals" while Greenspan, for his part, quipped that he saw no national bubble in home prices but instead areas of "froth" in local markets that could suffer price declines.

All of this feels eerily similar to what's happening now.